For the past several years, the MSU Innovation Center has awarded the Ian Gray Scholarship to MSU students who demonstrate hard work, determination, and a passion for entrepreneurial success.

Gray, for whom the scholarship is named, spearheaded the creation of the MSU Innovation Center and served as vice president for Research and Graduate Studies at MSU until his retirement in 2012. The scholarship is awarded to an MSU student each year who exhibits qualities of an entrepreneur.

In 2021, that student was Ethan Hopp, an MSU senior from Detroit majoring in electrical engineering.

Bitcoin, Ether and Ravencoin. As cryptocurrency sweeps the nation, Hopp wanted to create something that makes the process a little easier to navigate. And with the help of the Ian Gray Scholarship, Hopp’s creation is picking up pace.

Hopp is creating a Bitcoin rig that allows users to go to class, game and surf the web, all while the software is earning cryptocurrency. Hopp was inspired after he wanted a better case to hold more equipment and realized the prices were too high.

“All of the other options I saw were either cheap and tossed together or cases that were $3,000,” Hopp explained. “Instead, I got together with some of my buddies who are mechanical engineers, and we designed this computer case that can hold multiple graphic cards and power supplies.” 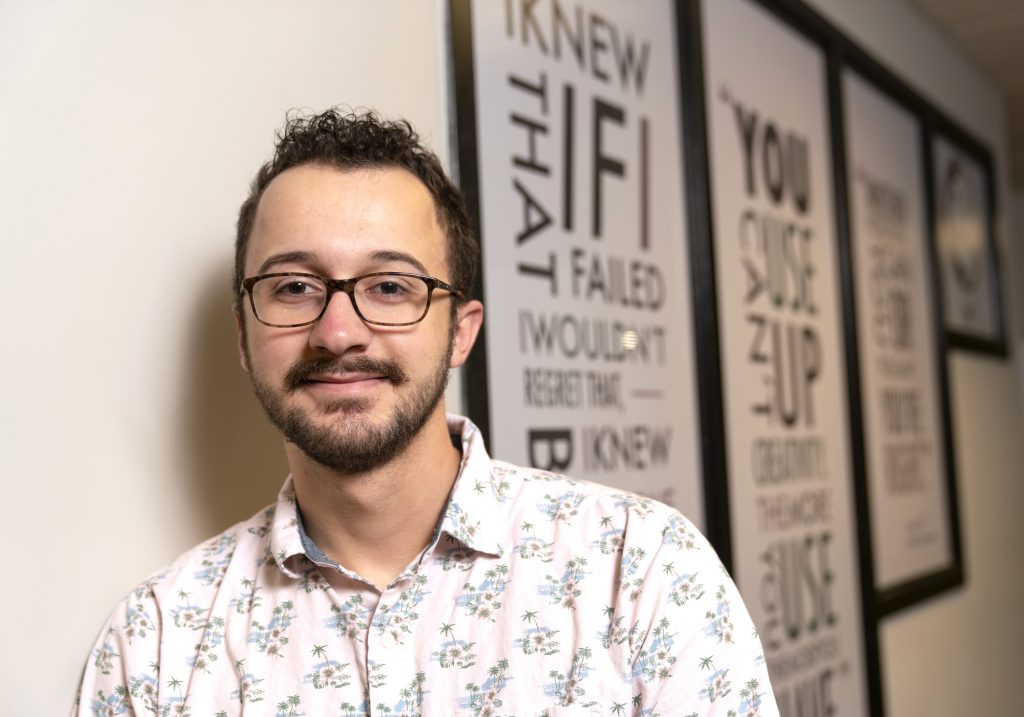 Cryptocurrency is a digital currency secured by cryptography, which makes it nearly impossible to counterfeit or double spend. Some popular cryptocurrencies include Dogecoin, Bitcoin and Tether. Combined, those three hold an estimated $947.6 billion in market value.

Mining for cryptocurrency is similar to mining for gold. Complex computers must compete with other users to solve a puzzle to validate their transactions and earn cryptocurrency.

There were some options out there for Hopp to use, but none of them fit his direct needs. He decided to tackle the problem head on and create his own solution.

To Hopp, the meaning of being an entrepreneur is clear: someone who takes risks.

“Someone who puts themselves out there and networks with people while also putting in the work behind the scenes,” Hopp added. “An entrepreneur isn’t afraid to reach out to someone who may know more than you.”

The recipient receives $2,000 per semester to help cover tuition or student expenses. With some of his school expenses now covered by the scholarship, Hopp has decided to use that flexibility to help his process become more independent and further his creation.

“I’ve been thinking about building a CNC router so we can actually use and create these cases ourselves,” Hopp said. “So instead of paying someone to do it for $1,000, we can actually just buy the material and do it ourselves.”

The abundance of resources offered by the MSU Innovation Center and MSU’s Burgess Institute for Entrepreneurship and Innovation has led to mentorship relationships, new skills learned in courses and now scholarship funding.

The next step for Hopp is to finish a second prototype. Once he is happy with the final product, he would like to tie into some big tech conferences.

Hopp and his team also utilized resources from different facets of the university as well. He partnered with the web and logo designers offered through the Burgess Institute for Entrepreneurship and Innovation.

“The fact that we can get money through the university is really great,” Hopp said. “It costs $1,000 just to become incorporated and another $1,000 to get a prototype done. We would not have been able to do that without support from this scholarship.”

MSU student Brendan Wang set his entrepreneurial path with one goal in mind: to help people live healthier and happier lives. Wang, a senior in MSU’s Eli Broad College of Business, has created a solution to help put an end to the nation’s vaping epidemic.

Wang created a device that mimics a traditional vape pen, minus the smoke, nicotine and other harmful chemicals. After nearly two years of hard work and determination, CAPNOS Zeroâ is off to a promising start. Through resources at the MSU Innovation Center, along with the Burgess Institute for Entrepreneurship and Innovation, CAPNOS Zero is now being sold to users across the country both online and in stores.

“We conducted so much research and development along with our manufacturer, engineering mentors and our team to then bring together what we have today,” Wang said. 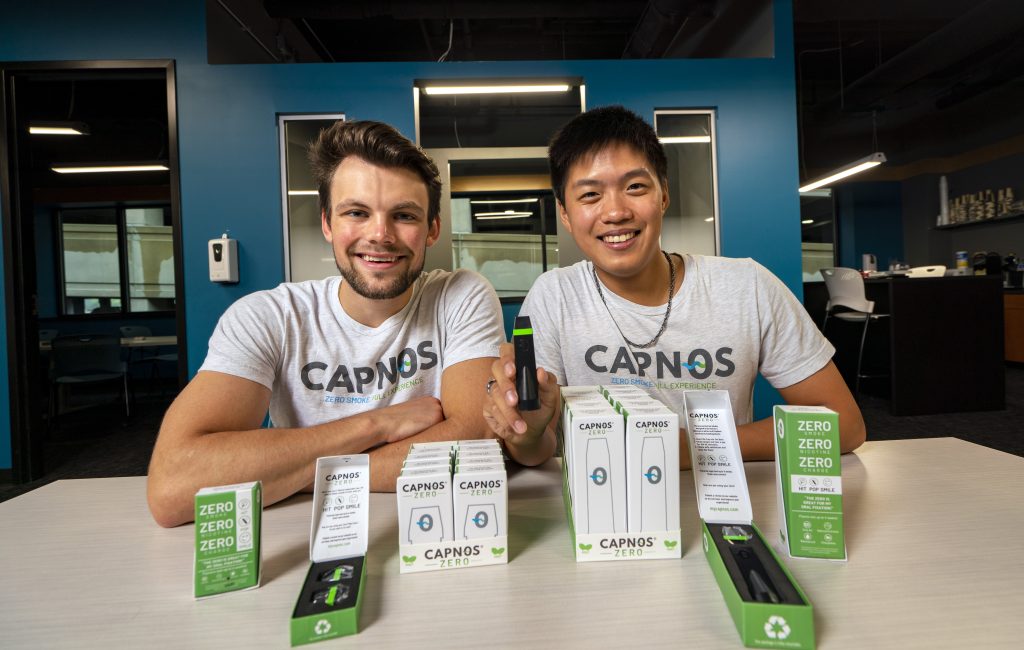 CAPNOS launched to the public in mid-September. Users can go online to order the CAPNOS Zero. Within three days of announcing the official product launch date, CAPNOS received over 40 additional pre-orders with $1,050 in revenue. On the day of their first in-person launch at East Lansing party store, Jonna’s 2 Go, CAPNOS sold half of its stock in-store and delivered over 320 CAPNOS starter packs.

Going into their product launch, CAPNOS prioritized three major fields: customer experience, operational excellence and relationships with their partners to continue growing as a company.

“We want to make sure we are providing the best service that we can to ensure the best possible customer experience,” Wang said. “We are making sure we can fulfill and deliver on time to not only our consumers, but also our retail partners and other partners alike.”

Wang was inspired by his own personal experience as a former vape user. He wanted to create a product that could help people beat their nicotine addictions and lead healthier lives.

Wang said being recognized as the 2020 recipient of the Ian Gray Scholarship helped advance his idea, and his hard work is definitely paying off.

“When I first found out I received the scholarship, I felt gratitude and disbelief. I’m just grateful for everyone, and I’ve been so inspired by the entrepreneurs around me,” Wang said. “I’ve looked up to my peers pursuing their academic careers as well, and I just thought, ‘wow, out of so many extraordinary people, I am so grateful to receive this award.’”

The scholarship provided Wang with $2,000 per semester to help with development expenses.

“As soon as I met Brendan – I knew that our team had picked the right person to receive this scholarship,” said Charles Hasemann, MSU’s assistant vice president for Innovation and Economic Development. “Brendan not only has the passion and drive to bring a product to market that will really make a difference in the world, but he has the winning attitude and exceptional people skills that will serve him well as he ventures into his professional career after college.”

Wang plans to expand his product line with hopes that CAPNOS will continue to grow around the world.

“The primary vision that I have for CAPNOS is to see that we can become a global company,” Wang said. “Seeing CAPNOS in obscure places in Europe or Asia, building more products, building our service line to combine tech with the physical aspect are all the major initiatives that I would like to see for CAPNOS over the next five years.”